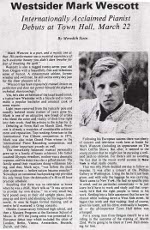 "Mark Westcott is a poet, and a mystic one at that. His performance was a mystical experience of such awesome beauty you didn't dare breathe for fear of breaking the spell."

Westcott is also a rugged twenty-seven year old from Oregon with a beautifully free and infectious sense of humor. A consummate athlete, former wrestler and swimmer, he still swims every day just for the sheer pleasure of it.

"Westcott has been exquisitely trained, insists on perfection and does not permit himself the slightest technical shortcomings."

Yes, he's also an habitue of the local Laundromat, a typical new Westsider with a bicycle and a roommate; a popular bachelor and amateur cook of some repute.

Light years removed from the typically pale and socially isolated music student of years gone by, Mark is one of an attractive new breed of artists who blend the color and vitality of their lives right into their work. And his artistry is richer for it.

Debuting at Town Hall on March 22nd, Westcott is already a musician of considerable achievement and reputation. Top-ranking American in the International Van Cliburn competition in 1971, Mark was also twice Grand Prize winner in the International Piano Recording completion, and holds other important awards as well.

This remarkably balanced musical personality grew up in a family of happy achievers. His father coached Olympic wrestlers, mother was a dramatic soprano, and his sister was also a gifted pianist. The family spend their vacations doing wilderness hiking, and that, mark says, "was before the plaid shirt syndrome—before nature became popular." Nowadays an occasional backpacking trip provides his only break from the demands of a 50 to 60 hour practice schedule.

Recalling that there was no television at home when he was a child, Mark tells us "It was up to me to provide my own drama." As a very small boy he'd pound away at their old upright piano, jumping up and down and shouting out his sagas to the world. At nine he began formal training, and at twelve he'd mastered a Grieg concerto.

Oberlin Conservatory followed high school, and then a Masters Program at the Eastman School of Music. In 1973 the young artist was presented in a European debut tour which included the cities of London, Berlin, Vienna, Amsterdam, Brussels, Zurich, and Oslo.

Following his European success there was plenty of concert and television work here at home for Mark Westcott (including an appearance on The Merv Griffin Show). But after, it seemed to the young pianist that he might just be pursuing a well-paid path to oblivion. For there's still no avoiding the fact that in the music world success in New York is what really counts.

That was why Mark decided one day to follow an impulse. It was after a concert at the Phillips Gallery in Washington. Using the fee he'd just been given, and with only the luggage he was carrying, Mark came to New York. He had no specific plan in mind, and no particular connections—he just knew he'd have to work and study and that eventually he'd find the right people to listen to his work. Settling into a little apartment that he saw by chance while walking down a West Side street, he began that work and that waiting. And of course, given his talent, and his drive, eventually it happened—the all-important Town Hall debut was arranged.

For a young man from Oregon there'll be a lot riding in the outcome of the evening of March 22nd. We're going to be there at Town Hall cheering for him.