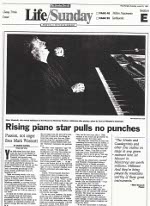 "You folks down here don't know what you have in the Mozart in Monterey Festival," pianist Mark Westcott said recently over the minestrone at Rosine's. "This is the most expensive orchestra on the face of the earth, and they're playing great masterworks of all time for you peanuts. Yet most of the community, and a distressing percentage of the press, doesn't understand what it's hearing at all."

These are strong words, to be sure. But Westcott, the young pianist whose Chopin B Minor Sonata was one of the high points of this year's Mozart in Monterey schedule, is a strong musical and intellectual personality, a man who, at a low ebb in his still-growing career, decided that "from now on I speak my mind; from now on I call the shots as I see them."

It's not hard to listen and take notice. He's though long and hard about everything he says, and he's full of passionate advocacy. As he warms up to his subject, he positively crackles with electric energy, like the force of nature he is.

Westcott might sound like an angry man. He isn't; he's more often full of praise for the things he loves than angry over the rest. Right now the thing he's praising is Oleg Kolavelenko's annual Mozart bash, and the "towering" musicians who perform in it.

But that "most expensive" tag? "Of course," he says. "The Strads and the Guadagninis and other fine violins on stage at any given moment here are worth millions. Millions! And they're being played by musicians worthy of these great instruments. And the music that's being played! Look . . . at any time the festival half of the audience are musicians who'll be playing the next night. It's not a busman's holiday at all. They're enthralled with what they're hearing."

Indeed. Westcott knows what he's talking about when it comes to the enthusiasm of his fellow performers. There were soft cries of "Wow!" at the e3nd of his Mozart Piano Trio, K. 502, and a chorus of audible sighs at the end of one movement of his Chopin. There was scattered comment about his work, all of it full of awe and respect, among the fiddles and violas in the green room even on the next night.

On the way here, however, his young career had a number of reversals that would have discouraged, or maybe even forced early retirement upon a less tough and resilient personality. Like the late Cuban pianist Jorge Bolet, who share his effortless technique . . . two years after a 1980s accident it was touch and go whether he [Westcott] would ever play the piano again.

The thing that saved him, he says, was something he learned from his mother, a dramatic soprano. "She taught me that 80 percent of the music business is sheer survival. You have to hang in there and last it out." More: "You have to learn from your errors. Everybody makes mistakes. You've got to go on. You may even be able to turn the layoff to good account."

This last has almost been a specialty with Westcott. Discouraged during a teaching stint at a Florida university where "the place was run by idiots and the atmosphere was unbelievably awful," he quit music for a year and a half, and used the time to move his repertoire into new channels. He'd been playing a "mainly late Schubert and Beethoven" program. Now he found that he had the kind of big technique you need to handle Liszt and Rachmaninoff. "I had no idea before that," he says.

But just as he was beginning to put the new repertoire on display, he suffered a bad fall in 1988, right after signing a new CD contract with Centaur Recordings. The injury was catastrophic: 7 1/2 hours on the operating table, a smashed upper left arm and extensive nerve damage, a hand totally paralyzed, fingers that would neither straighten nor voluntarily move.