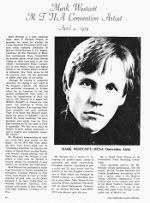 Mark Westcott is truly American talent. Born in Portland, Oregon, he launched his career by winning the Young Musicians Foundation debut auditions (with orchestra conducted by Michael Tilson-Thomas) in Los Angeles, California; the first University of Maryland International Piano Competition; the Rudolph Serkin Award from Oberlin College in Ohio; third prize in the Van Cliburn International Piano Competition in Fort Worth, Texas; and highest awards at the Eastman School of Music in Rochester, New York, where he did his graduate work. He has performed in almost every part of the nation.

Although his training is completely American, his playing is very much in the European tradition. Mr. Westcott has performed extensively in Europe, where, for an American, he has won unusual compliments from critics. In Berlin his interpretation of Bach was said to "put Westcott in a league with Wilhelm Kempff"; in Vienna the critic stated, "An American in Vienna can score with Schubert if he expresses Schubert's simplicity and quiet greatness. There is no doubt that Westcott understands the genius of Schubert."; and in Zurich the review concluded, "his interpretations stem totally from the European tradition and he has come to know it organically. We have never heard the Brahms F-minor Sonata interpreted in such a creative and technically masterful manner."

Mr. Westcott's interpretations of modern works have been praised no less highly. Of his 1976 New York debut, the New York Times noted how he "dramatized beautifully the structure and texture of Donald Keats' excellent Sonata, with forceful, colorful playing." And the Daily News said, "Mr. Westcott is completely at home from the baroque to modern schools: his scholarship in each matches his technique and enthusiasm."

Mark Westcott has performed in recital from Nantucket to Hawaii (including the prestigious Caramoor Festival in New York). From Oregon to Latin and South America: as a guest artist on the Queen Elizabeth 2, the Merv Griffin Show, on National Education Television, every classical radio station in New York, and with major American symphony orchestras.

Mr. Westcott also is known for his inspiring and popular master classes at universities and music conservatories throughout America. Last Spring he gave a recital and 2 1/2 hour master class for students of the New England Conservatory of Music which was broadcast on WGBH in Boston to a half-million people in seven states. Mark Westcott's first recording (Franck: Symphonic Variations, with the Royal Philharmonic Orchestra on the Musical Heritage Label-MHS-3515) was released early this year.

He is Grand Prize Winner of the International Piano Recording Competition.

Some upcoming activities for Mr. Westcott include performances with the Oregon, Florida, Norfolk, Baltimore and Chicago Symphonies, the opening recital (and a master class) at the Brigham Young University International Piano Festival and at the national convention of the Music Teachers National Association in 1979, a recital tour of the South with cellist Valter Despalj, a solo recital tour of Mexico, etc.