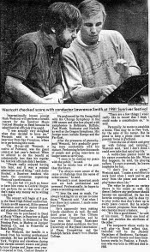 Internationally known pianist Mark Wescott will perform a benefit concert for the Sunriver Music Festival Monday in Bend because he asked festival officials if he could.

"I was actually very delighted when they decided to have me," Wescott said in a telephone interview from San Francisco, where he is performing this week.

The 33-year-old Wescott, a native of Portland, was the guest soloist at last year's festival. When he offered to do the benefit at substantially less than his regular fee, festival officials didn't hesitate.

"People really enjoyed having him here, and it was a mutual admiration sort of thing," said Jodie Bischof, a Sunriver resident who heads the committee organizing Wescott's performance.

"We just feel it's such an honor to have him come to Central Oregon and perform for us that even if we don't make any money we're willing to do this."

The concert will begin at 8 p.m. in the Bend High School auditorium. Tickets are $8 reserved, $5 for general admission and $3 for senior citizens and students 18 and under.

They can be purchased in Bend at Music Village, in Sunriver at Bank of the Cascades, in Redmond at The Printing Post, in Madras at Juniper Banking Co. and in Prineville at Bank Rexall Drug.

For Wescott, the benefit is a break from his touring professional schedule. He has performed in New York, Virginia and elsewhere during the current concert season and plans to tour Europe and Japan next year. Compared to that, Central Oregon is a homecoming.

"I love the area so much, I'm always looking for an excuse to come there," Wescott said. "And when I was there last Summer, I made some nice friends."

He's apparently been making friends elsewhere as well. He took third prize in the Van Cliburn International Competition, and he has won the Young Musicians Foundation debut auditions, the first University of Maryland International Piano Competition and the Rudolph Serkin Award from Oberlin College.

He performed for Sir Georg Solti with the Chicago Symphony in the 1980 season and also has played with symphonies in Baltimore, Buffalo, Fort Worth, Rochester and Norfolk as well as the Oregon Symphony. His foreign tours include Europe and the Far East.

After the pressures of precocity, said Wescott, he's gradually growing more comfortable with his stature. Performing before thousands of people and giving interviews no longer seem so terrifying.

"I seem to be making my place with the public," he said.

But he thinks less of the past than the future.

Wescott's most important goals now are both professional and personal. Professionally, he hopes to snare a recording contract.

"There are a few things I would really like to record that I think I could make a contribution on," he said.

Personally, he wants to establish a home. That may be in New York, for the sake of his career. But he plans to keep a piano close to his parents' home in Portland.

"I love the out of doors and grew up with fishing and camping," Wescott said, "and I don't think I could ever take that out of my life."

A world-class pianist could let his career overwhelm his life. When that happens, he said, his playing suffers. To cure overwork, he leaves loopholes for fun.

"I don't live at a piano," Wescott said. "I make a real effort to work hard when I work and to get away from the piano and music. I play better when I do."

The value he places on variety shows in his music as well. He doesn't believe any performer should become too specialized. He has his favorite composers, and he does try to play works that don't show up in every piano concert. But he selects his concert programs from throughout classical music's history.

"It's like a good dinner," he said of his music. "I think one kind of food just enriches the attributes of the other."

The composers whose works he will play in Bend reflect that. Included will be the Diabelli Variations of Beethoven, Rachmaninoff's Second Sonata and three little-known works by Poulenc, a Frenchman who was born in 1899 and died in 1963.