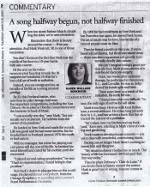 When too many furious March clouds hog the skies, we're sent reminders.

Reminders that there is beauty around the corner—if we pay attention. And Mark Wescott, 58, is one of those reminders.

You don't focus on the fact that Mark lost the middle of his face to a 10-year battle with skin cancer.

Or the scar on his twice-reconstructed face that reveals the 26 surgeries he's endured. Or that he's lost a full set of teeth to radiation.

Instead you see energy and joy, as he talks of his life as a young musical prodigy.

By 23, this Portland native, who now lives in Lake Oswego, had won five important competitions, including the Van Cliburn. He studied at Oberlin Conservatory and the Eastman School of Music.

"I was socially very shy," says Mark, "but personally very exuberant. My hobbies form the center of my passions."

He landed in New York and made the rounds. Life was good and he had some success, but he headed back to Portland around 1976; his mother had cancer.

With no manager, but a love for playing concert piano still the core of his life, he booked his tours himself and cared for his mother until she recovered.

"I played second-string symphonies," he says. "I had no representation; I hated being in that position."

But Mark's desire to play got him on the world stage. He played almost everywhere, from the Chicago Symphony to recording with London's Royal Philharmonic Orchestra.

By 1990 he had residences in New York and San Francisco but again, he moved back home. The art of music was his love, but the life of a concert pianist wore on him.

Then he found a patch on his nose. It was a basal cell carcinoma, but there was worse news—there was also a squamous cell growth, a potentially deadly skin cancer.

We can't imagine losing a good portion of a face. Mark shows photos of a cute boyish face pre-surgery.

Once, two weeks after radiation therapy, he performed in Vancouver, B.C., and Corvallis. He was so dehydrated his hands split and bled.

Three years later, as a result of the radiation, his teeth fell out.

"I found that to be very difficult," he says, the only sign of sorrow he will allow.

Mark is too busy. He lives with Kent Ballantyne, a recent widower. He is teaching privately here in L.O., and has written a book that has attracted the interest of a publisher.

"He's taken over my kitchen and my back yard," Kent says, referring to Marks's love of cooking and gardening.

Facing cancer taught Mark there's nothing between him and the grave.

"My situation doesn't bother me so much. The beauty of life has increased 100-fold and I feel that way today."

Then he plays Debussy's "Clair de Lune." If you doubt there is beauty around the corner, Mark is proof you're wrong. Maestro comes to mind.