Westcott Pleases at Mozart in Monterey 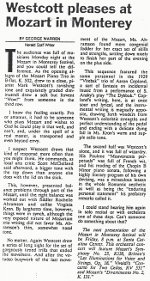 The Audience was full of musicians Monday night at the Mozart in Monterey festival, and you could tell the difference. As the opening allegro of the Mozart Piano Trio in B-flat, K. 502, drew to a close, pianist Mark Westcott's ravishing tone and exquisitely graded diminuendi drew a soft but fervent "Wow!" from someone in the third row.

I know the feeling exactly. Pro or amateur, it had to be someone who plays Mozart and wishes to God he could play it that well, and can't, and, under the spell of a real master, is transported and even beyond envy.

I suspect Westcott draws that kind of response more often than you might think. He commands, as local arts critic Scott McClelland said afterward, a bigger tone with the top down than everyone else does with the lid on the stick.

This, however, presented balance problems through part of the Mozart, until the right balance was worked out with fiddler Rochelle Abramson and cellist Virginia Kron. By larghetto time, however, things were in synch, although the very exposed writing did not favor Ms. Abramson's thin, somewhat nasal tone.

No matter. Again Westcott drew a series of long sighs for the set of gorgeously timed trills that ended the movement. And after the virtuoso busywork of the last movement of the Mozart, Ms. Abramson found more congenial fodder for her exact set of skills and strengths, settling down nicely to finish her part of the evening on the plus side.

This sequence featured the same personnel in the 1929 "Vitbsk" tri of Aaron Copland, a sort of fantasia on incidental music from a performance of S. Ansky's play "The Dybbuk." Copland's writing, here, is at once sour and lyrical, and the instrumental writing is magically apposite, drawing forth wonders from Westcott's colorist strengths and perfect understanding of the pedal and ending with a delicate dying fall in Ms. Kron's warm and supple cello tone.

The second half was Westcott's alone, and it was full of wizardry. His Poulenc "Mouvements perpetuels" was full of French wit, and his reading of Chopin B Minor piano sonata, following a highly literary program of his own devising, was a miraculous lesson in the whole Romantic aesthetic as well as being the "enduring personal statement" his prefatory remarks called at.

I could stand hearing him again in solo recital or with orchestra one of these days. Can't someone do something about that?

The next presentation of the Mozart in Monterey festival will be Friday, 8 p.m. at Santa Catalina Center. The orchestral concert will feature Mozart's Symphony No. 25, K138, Britten's "Les Illuminations for Voice and Strings, Op. 18, Vivaldi's "Concerto for Two Cellos, RV 531" and Mozart's "Divertimento No 2, K. 131."