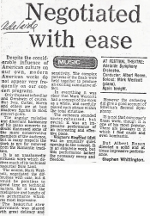 Despite considerable influence of American culture on our own, modern American works do not appear very frequently on our concert programs.

Only Copland is familiar and Gershwin of course. But, Ives, Carter, Harris and others are at best shadowy figures to most concert-goers.

The angular melodies and dissonant harmonies of his piano concerto no doubt distressed some of the more conservative members of the audience, but in many respects the work is not far removed from the Romantic tradition.

It is an unashamedly virtuosic work which derives much of its technical resources from Liszt.

The soloist, Mark Westcott, negotiated the difficulties with ease, but it would be pointless to spend time on technical matters, for it was the intelligence and lucidity of his performance which was most impressive.

The beautiful slow movement was played with great delicacy and sensitivity. The complex patterns of the finale were held together to produce an exciting cumulative effect.

In everything it was clear that Mark Westcott had a concept of the work as a whole, and carefully placed each phrase within the total structure.

The orchestra sounded under-rehearsed, but overall it was an impressive performance of an interesting and effective piece.

Wagner's Siegfried Idyll was an unusually quiet opening to the concert. It is an exquisite work, but this performance lacked the necessary sweep and freedom.

However the orchestra did give a good account of Sibelius's Second Symphony.

It is not that composer's finest work, though it is one of his most popular. There are passages in it which I find crude and even bombastic.

But Albert Rosen directed a solid and at times impressive performance.