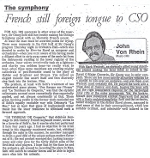 FOR ALL HIS succeeded in other areas of the repertory, Sir Georg Solti still has trouble making his Chicago Symphony speak with an idiomatic French accent.

At least the man must be awarded points for trying. There were moments in the first half of Sir Georg's program Thursday night in Orchestral Hall - which was devoted to works by Maurice Ravel as composer and orchestrator - when you were aware of his having made a diligent effort to strip away some of the sonic fat from the instruments residing in the lower register of the orchestra. Inner voices occasionally took on a lightness and clarity you seldom hear - or really want to hear - when these same musicians are erecting mighty cathedrals of post-Romantic sound to the glory of Mahler and Bruckner and Strauss. You noticed an elegant melodic line assert itself and then discreetly step back into the texture. Nice.

The problem, at least with Solti's treatment of the two orchestrated piano pieces, "Une Barque sur l"Ocean" and "Le Tombeau de Couperin," was that the stylistic refinements seemed more cosmetically than organically applied, and not always consistently at that. Those great, lurching swells in the former work reminded me of Solti's equally excitable way with Debussy's "La Mer," but at least that piece of impressionist water music has inner resilience to withstand such a forward approach.

"LE TOMBEAU DE Couperin," that delicious homage to the 18th Century French keyboard music, seems to be a favorite of Solti's, for it was he who last performed it here four years ago. I had no objection to his brisk tempi in this elegantly manicured music, but, whisking through the suite in this manner, he somehow managed to drain a good deal of the unique antique-modern flavor out of it; the end product emerged dry, lacking transparency and color save for the tartly stylish solos of the first-desk wind players. I hope that by the time he and the orchestra get around to recording the piece in May, Solti will switch to smaller forces and be able to inject more elan into his upbeats.

With Mark Westcott, an obviously gifted young American pianist making his local debut as soloist in the Ravel G-Major Concerto, Sir Georg was in safer company. There are few more saucily attractive vehicles for a pianist to win over an audience, and win them over Westcott most certainly did. He played to work with a great deal of fluency and dash, teasing the keys with just the right insouciance required for the hard-edged jazzy riffs of the outer movements. Yet, the back-to-Mozart slow movement elicited finger work that purled with a finely sculpted simplicity. Solti and the orchestra, rather deadpan in the earlier Ravel pieces, managed to shed some of that in their accompaniment, which was suitably brilliant, and admirably well tailored to the -(missing text)-